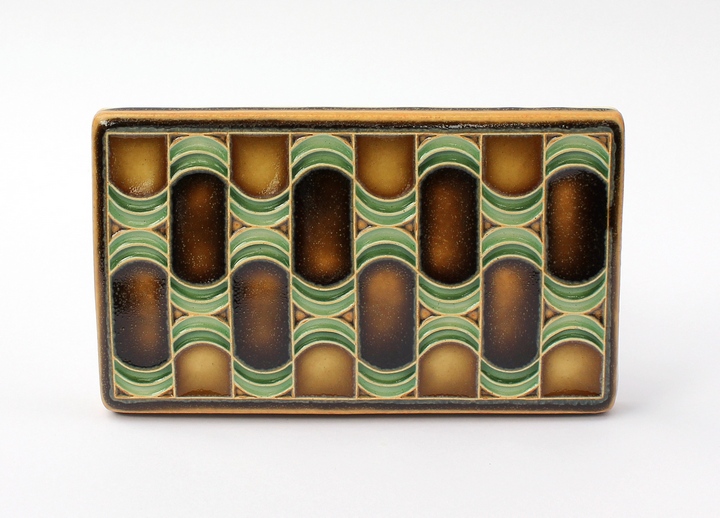 This small modern tile design features a pattern of waves and arcs glazed in shades of green and brown. Install a series of these to create a wallpaper effect or hang one individually–the back of the tile is double notched so the tile can hang horizontally or vertically..

Made by One Acre Ceramics in Milan, Michigan. Thomas Gelsanliter began working with clay in the 1990s in Alexandria, VA and received his MFA from Cranbrook Academy of Art. He worked as a moldmaker as well as a production manager at Motawi Tileworks in Ann Arbor, MI for nearly 9 years. Thomas’ designs are influenced by historical furniture, industrial plate ware, architecture, and classic Arts & Crafts and folk art iconography. Sarah Gelsanliter has been working with clay since 1992. She worked as a production potter at Greenfield Village in Dearborn, Michigan for 10 years. She has taught ceramics classes and workshops at Yourist Studio, Pewabic Pottery, and the Ann Arbor Art Center. Sarah spent a year living in Japan, visiting studio potters throughout the country, and traveling to Korea, China, and Thailand. Her work is influenced by Asian art, Japanese brushwork and Arts & Crafts design.