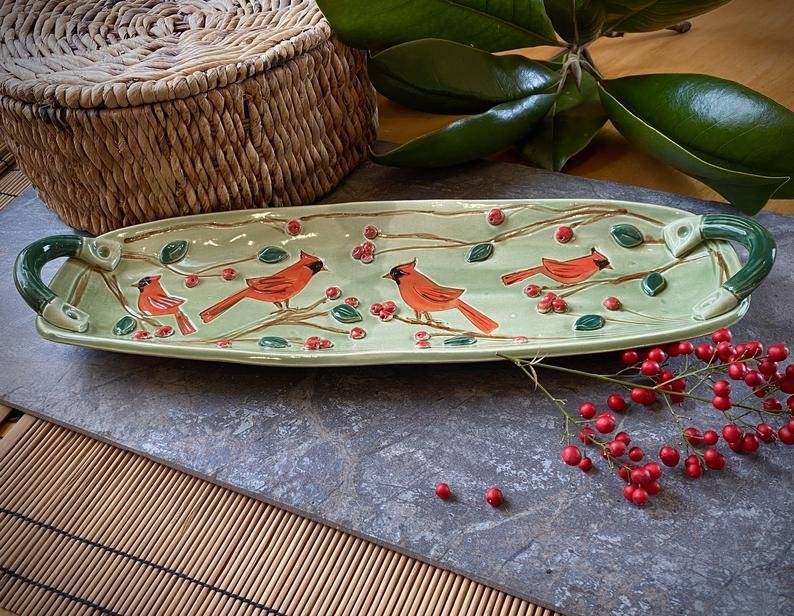 As beautiful as it is practical. This large handled tray features a group of cardinals perched on branches. It's a wonderful piece of American-made functional pottery by Bluegill Pottery in North Carolina. Measures about 16" long, 5.25" wide and just over 1" deep. 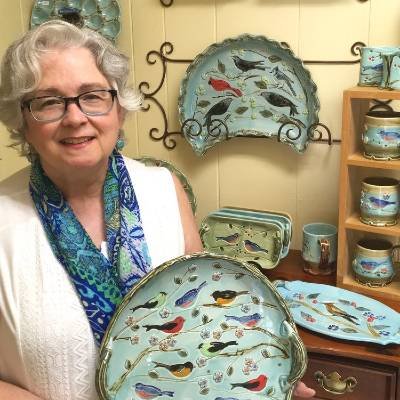 “The tactile impression is as important as the visual impression, so carving and texturing methods form a common thread throughout my body of work.”

Vicki Liles Gill graduated with a Bachelor of Fine Arts in painting and drawing from Louisiana State University in Baton Rouge in 1979.

Studies at Gaston College and Penland School of Craft as well as workshops with nationally known potters form the basis of her knowledge and skills in clay.

Vicki established Bluegill Pottery in 1997. Her forte is thrown and handbuilt stoneware and porcelainous clay. Firing takes place in oxidation and, on occasion, in an atmospheric kiln. The tactile impression is as important to her as the visual impression, so carving and texturing methods form a common thread throughout the body of work. A desire to use and master techniques, such as carving and development of rich surface color and texture was influenced by Eastern pottery. Everyday use of handmade work was another important part of the Eastern tradition that caught Vicki Gill’s attention.